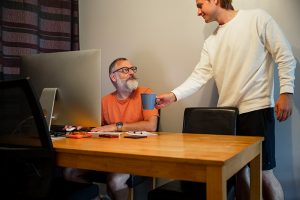 Last May, we launched a special online COVID-19 Survey of Child of the New Century members to help understand the impact of the COVID-19 pandemic on your work, your health, your family and your social life. We also invited participants in four other studies (born in 1946, 1958, 1970, and 1989-90) to complete the survey. We asked you to complete a second survey between September and October. In all, across the five studies, more than 29,000 of you took part in one or both of these surveys.

Academics at the Centre for Longitudinal Studies (CLS) carried out research looking at how people’s living arrangements, their relationships with family members and romantic partners, and their access to social and emotional support had been affected by the first COVID-19 lockdown in spring 2020.

Around eight in ten (82%) of your generation said you were living with your parents during lockdown, with 7% of you living alone. More than two fifths (42%) of you who had been living independently reported that you had moved back to your family home since the outbreak. Unsurprisingly, the majority of students (60%) returned back from their studies, and 24% of those who were employed moved back in with parents. Only around 2% of you moved in with a romantic partner.

During May, the living arrangements of most participants in the four other studies remained unchanged. Although the majority of people lived with others, a quarter of those in the two oldest generations, aged 74 (26%) and 62 (28%), a fifth (21%) of 50-year-olds and almost one sixth (15%) of 30-year-olds, lived alone. Living with dependent children was most common among 50-year-olds (37%) and 30-year-olds (30%). Only 4% and 5% of those aged 62 and 50, respectively, reported that one or more of their children had moved back home.

Conflict with those around you

One fifth of you (20%) reported that you had been involved in more conflict with people around you since lockdown. This was much higher than among the other age groups who took part in our survey, who reported only 4%-11% more conflict. The oldest group, those aged 74, reported the greatest decrease in conflict (17%), compared with 12%-14% for all other generations.

The researchers found that among all groups, except 50-year-olds, changes in living arrangements were linked to raised levels of conflict.

Two fifths (41%) of your generation reported that they had a romantic partner. In comparison, more than three quarters of those in the other studies were in a relationship.

Social and emotional support during lockdown

We asked you a range of questions about the social and emotional support you could access from family and friends. For example, we asked the extent to which you could count on people around you for help if you were sick in bed. We also asked whether you had people you trusted for advice.

Your generation and the 30-year-olds in our survey were more likely to say they had people they could count on for support compared to the older generations. In the oldest generations, men reported more perceived support if they were sick in bed than women. Among those aged 62 and 50, those who were single had the lowest levels of social and emotional support while those in cohabiting relationships had the highest levels.

Why this research is important

This research is some of the first to look at your living arrangements, relationships with family, friends and romantic partners and levels of emotional and social support during the lockdown period. Subsequent COVID-19 surveys will add to the data available for important research in these areas.

A big thank you to all study members, across the five studies, who completed our surveys.