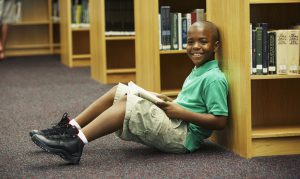 Save the Children’s Read On. Get On. campaign has used findings from Child of the New Century in work with local primary schools in Northern Ireland.

Save the Children and Black Mountain primary school have been encouraging parents to come into class to read to their children.

“We started asking parents to join their children at school, and the enthusiasm for reading has particularly improved,” said school principal, Jill Black. “Parents are able to enjoy reading, and this has a knock-on effect for their children. We’ve seen a huge increase in their attainment and achievement in reading.”

The programme began after research using information from Child of the New Century showed that many disadvantaged children begin school with below average reading and language skills.

Researchers analysed information from almost 2,000 study members from across Northern Ireland. They found that 65 per cent of 5-year-olds from poorer homes had below average vocabulary scores, compared to only 38 per cent of those who had never experienced poverty.

The head of Save the Children Northern Ireland, Fergus Cooper, said that getting parents involved in their child’s reading was important in developing literacy skills.

“Every parent wants their child to succeed but many parents don’t know how to reinforce their child’s learning. Early language development is a key skill that leads on to good reading, so we need to invest and engage much earlier,” Mr Cooper said.

The aim of the Read On. Get On. campaign is to get all children, especially those from disadvantaged backgrounds, reading well at age 11 by the year 2025. The campaign draws on research using Child of the New Century and other cohort studies to understand who struggles with reading, and how improving reading skills can benefit children in the long-term.