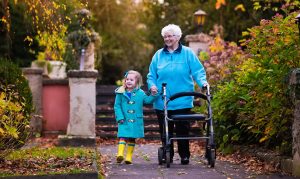 Regular time spent with grandparents can be beneficial for young people’s language development.

Researchers from the University of Turku in Finland studied information from nearly 13,800 CNC study members to investigate the effect grandparents can have on their grandchildren’s lives.

At age 3 and 5, you took part in language assessments to test your reading and writing skills.

The researchers found that those of you who saw your grandparents at least once a month performed better on language tests at these ages. This was in comparison to those who saw their grandparents less than once a year. Children with more regular contact with their grandparents also had fewer emotional and behavioural problems.

The findings were similar for families who had financial help from grandparents, compared to those who did not.

However, when the researchers looked at your individual progress over time, they were unable to find a link between your individual development and the relationship you had with your grandparents.

This suggests that grandparents are not the cause of their grandchildren’s positive development. One possible explanation for this is that children who progress well develop closer relationships with their grandparents. Alternatively, there could be some separate factor that both causes grandparents to be more involved, and children to perform better.

Despite the findings, the authors insisted close ties with grandparents are still valuable. They explained that grandparents can teach children about their family history and help them to build their own identity.