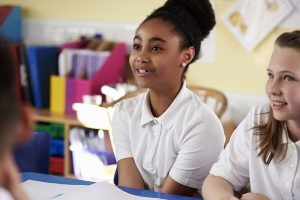 National primary school tests that school children in England take in Year 6, do not appear to affect their happiness or wellbeing, according to findings from Child of the New Century.

In this recent study, the research team analysed data from those CNC members who completed the Age 11 Survey between 30 March 2012 and 17 May 2012. The Key Stage 2 tests (known as SATs) take place in one specific week of the academic year, and in 2012 this was between 14 and 17 May. By restricting the analysis to those of you who completed the Age 11 Survey in the lead up to the tests, the research team could look at how the approaching tests might have affected your wellbeing.

Little impact on wellbeing and happiness

The study compared the experiences of study members in England (where school children sit the Year 6 SATs) and in Northern Ireland, Scotland and Wales (where children do not take SATs). This showed there was little difference in levels of wellbeing and happiness at age 11, regardless of where study members lived and whether they took SATs or not. For example, 24% of those in England said they felt unhappy about their schoolwork prior to the tests, while this figure was 28% for those living in the rest of the UK.

Additionally, among those who did take the test, there was no significant change in how they felt about themselves, their school or family life in the weeks preceding and following the tests.

Study author Professor John Jerrim (UCL Social Research Institute) explained: “There is growing concern about the mental wellbeing of young people, including how this is related to national tests at school. However, the study found that happiness and wellbeing levels among children in England and the rest of the UK were very similar to one another and often overlapped.

“The research also found there was little evidence to changes in wellbeing around the time of Key Stage 2 tests, or that children in England become happier – either in general or about school – once these tests are over. Equally, there was no evidence to show that pupils who were happier or more self-confident in the build-up to the tests achieved higher scores.”

These findings provide an important counter to concerns about the potential negative impact the Key Stage 2 tests may have on children’s wellbeing. The tests are considered “high-stakes” for schools as the results get published in school league tables. However, they are not necessarily as important for children. One explanation for the findings could be that the wellbeing of the average Year 6 pupil may not be affected by the tests because the results do not have personal consequences for them; the secondary school they might attend, or the subjects they might study, do not depend on their test results.

While this new study did not find strong enough evidence to scrap the tests on wellbeing grounds, it does recommend further investigation into the positive and negative effects on children. This includes identifying particular groups of children whose wellbeing is more likely to at risk as a result of taking the tests.

This research was published on the Assessment in Education website in September 2021.

The findings were featured in The Guardian, the Daily Mail, i News, The Telegraph, the Independent and Schools Week.