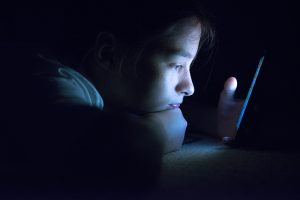 Teenagers who use social media for at least three hours a day are more likely than their peers to go to sleep late and have trouble waking during the school week.

When you were 14 years old, we asked you about your daily social media habits, as well as your sleeping routines.

The researchers took into account factors that could be associated with heavy social media use and poorer sleep, such as family background, mental health and wellbeing, and physical health.

The findings have highlighted how heavy social media use can disrupt sleep during the school week as teens could be catching up with their friends on social media close to bedtime. It also suggested that social media might indirectly interrupt a regular sleeping schedule as other activities, such as homework, could be delayed due to checking and responding to social media notifications.

Thanks to the data your generation has provided, policymakers in government and health professionals will now be able to provide better support and guidance to teenagers on how to maintain good sleep habits.

The full scientific paper was published in BMJ Open in October 2019.

BBC News, the Daily Mail and The Telegraph also covered the research.